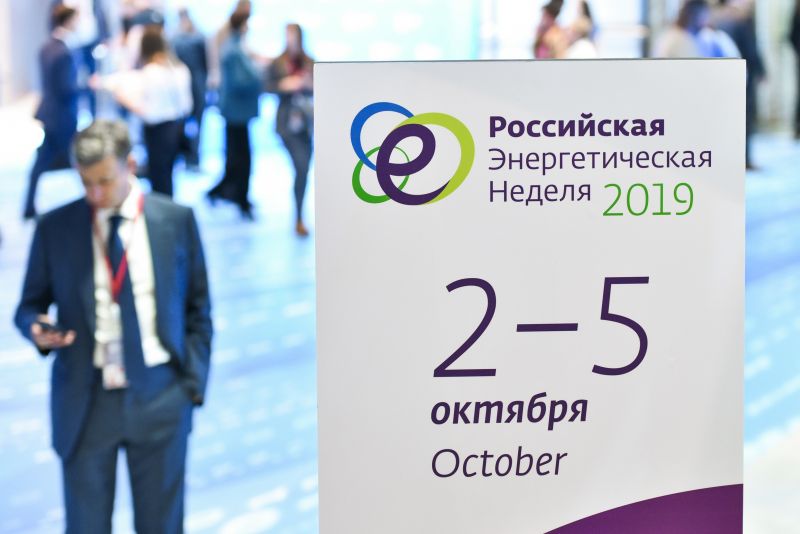 “This year, and we mark that with satisfaction, we have a record high number of participants, which means that the Forum has been gathering pace. I am certain that the foundation of this interest is our resolve to cooperate and build confidence. All that is aimed at technological progress in the energy sector, at energy security and environmental safety of our planet… It is of importance to employ all the mechanisms to balance the market, bearing in mind interests of all stakeholders, and find mutually acceptable solutions,” noted Vladimir Putin in his speech.

The Russian Energy Week was organized by the Ministry of Energy of the Russian Federation and the Roscongress Foundation, with the support of the Government of Moscow.

The Forum business programme was based on discussions touching upon digital transformation of the industry, development of the coal market, nuclear energy, new pricing trends at international oil markets, prospects of cooperation between fuel and energy companies and defense industry complex for import substitution, technological development and environmental security of the energy market.

On 3 October, one of the key REW events was held – the 21st Ministerial Meeting of the Gas Exporting Countries Forum (GECF). It is the only intergovernmental organization in the global natural gas sector. The meeting was attended by Minister of Energy of the Russian Federation Alexander Novak and heads of energy agencies representing Algeria, Bolivia, Venezuela, Egypt, Iran, Qatar, Libya, Nigeria, the UAE, Trinidad and Tobago, Equatorial Guinea, Azerbaijan, Angola, Iraq, Kazakhstan, Norway, Oman, Peru and other countries. Delegates discussed dynamics, trends and prospects of the development of the natural gas market and considered the GECF Global Gas Outlook 2050 prepared by the organization.

The Russian energy track agenda was widely presented at such sessions as ‘Towards Leadership in the Global Energy Mix: Priorities of the Gas Industry’, ‘Digital Transformation Cannot Be Stopped: How Can We Ensure Critical Infrastructure Security?’, ‘The Development of Global Energy and the Future of Coal’, ‘Nuclear Energy as an Integral Element of the Sustainable Future Agenda’, ‘Further Regulation of the Russian Power Grid: Target Model and Amendments to the Development Strategy’. The sessions featured representatives of both Russian and foreign companies, including: Alexey Likhachev, Chief Executive Officer, State Atomic Energy Corporation ROSATOM; Viktor Zubkov, Chairman of the Board of Directors, Gazprom; Pavel Livinsky, General Director, Chairman of the Management Board, Rosseti; Carlo Palasciano Villamagna, General Director, Enel Russia; Gerhard Schroeder, Chairman of the Shareholders’ Committee, Nord Stream 2 AG, and others.

“The issues of energy preservation and efficiency became an integral part of the Russian Energy Week agenda. In fact, they have turned into new trends for energy sector development. Suggestions on further informational transparency and the best projects positively assessed by leading experts will be implemented in our regions," said Deputy Minister of Energy of the Russian Federation, Deputy Chairman of the Organizing Committee Anton Inyutsyn.

On the #TogetherBrighter Youth Day the following events were organized: interactive sessions on starting youth projects to develop and promote the Russian energy sector; youth predictions for the future of global energy development; CASE–IN International Engineering Championship; the final of the All-Russian contest of graduate qualification projects in the fields of power and electrical engineering, and many others. During the traditional Open Dialogue young people had the chance to meet Minister of Energy Alexander Novak and Minister of Science and Higher Education Mikhail Kotyukov.

“As one of the global fuel and energy leaders, Russia greatly contributes to the development of the global energy agenda. Such events as the Russian Energy Week International Forum are a key platform for discussing the future of the industry. This year, at the Forum, with our partners we discussed joint plans for fuel and gas sector development until 2024 in the changing world, as well as prospects of the energy sector related to the implementation of large-scale projects,” underlined Minister of Energy of the Russian Federation Alexander Novak.

The educational programme featured events on occupational guidance for school children, while university students talked to representatives of energy companies and institutes, and attended workshops on CV building, job interviewing, and the finding the dream job.

The main programme of the Forum included over 70 events in various formats, such as the plenary session, panel sessions, roundtables, lectures, meetings of industry experts etc. 417 speakers took part in the Forum business programme.

“The Russian Energy Week provides its participants with a unique opportunity to discuss prospects of industry development, share experience in technology and innovation in fuel and energy sector, as well as listen to viewpoints by leading global experts. It is of particular importance these days, when the agenda is formed by the issues of energy security and integrity of the energy sector ecosystem. Russia has a reputation of a reliable energy supplier and is a strategic partner for the global energy market. That is why sustainable development of both Russian and global energy sector depends on our proactive position,” said Adviser to the President of the Russian Federation Anton Kobyakov.

At their stands, REW partner companies presented their cutting-edge developments and achievements in fuel and energy sector in a multimedia format. Among them were Gazprom, Rosseti, NOVATEK, ROSATOM, Fortum, Transneft, Power Machines, Rosneft, and the Government of Moscow.

The Forum venue was attended by over 400 Russian fuel and energy companies’ representatives.

From 2 to 5 October, more than 250 volunteers were working with REW participants and guests at the Forum venue.

The most significant signed documents:

REW 2019 mobile app (rew 2019) is the best way to get the latest information about the events and available services.

The app served as a tool for work and communication planning at the Forum.

During the Forum the app was downloaded over 2,500 times, which is two times more than last year.

Live broadcasts of business programme events were available at the Forum website in the Programme section, and they have been saved in the archive after the event. During the Forum the service was used over 20,000 times.

The ‘Russian Energy Week’ (REW) International Forum took place in Moscow on 2–5 October 2019. The Forum is being held to demonstrate the prospects of the Russian fuel and energy industry and unlock the potential of international cooperation in energy. The number of participants during REW 2019 was 10,000.

The Roscongress Foundation is a socially oriented non-financial development institution and a major organizer of international conventions, exhibitions, and public events.

The Roscongress Foundation was founded in 2007 with the aim of facilitating the development of Russia’s economic potential, promoting its national interests, and strengthening the country’s image. One of the roles of the Foundation is to comprehensively evaluate, analyse, and cover issues on the Russian and global economic agendas. It also offers administrative services, provides promotional support for business projects and attracting investment, and helps foster social entrepreneurship and charitable initiatives.

Each year, the Foundation’s events draw participants from 206 countries and territories, with more than 15,000 media representatives working on-site at Roscongress’ various venues. The Foundation benefits from analytical and professional expertise provided by more than 2,500 people working in Russia and abroad. In addition, it works in close cooperation with economic partners from 94 countries worldwide.